Here the Nile is at its most beautiful, flowing through amber desert & granite rocks, round emerald islands covered in palm groves & tropical plants.

In Aswan the pace of life is slow & relaxing. The visitor can walk around watching the sailboats or sit in floating restaurant listening to Nubian music & eating freshly-caught fish.

Long ago Aswan was Egypt’s gateway to the south & the commercial bridge from Egypt to Central Africa.

Aswan is about 900 km. south of Cairo; it enjoys a dry warm climate in the winter, making it a favorite place & a popular winter resort. 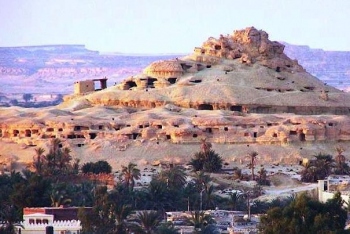 Aswan has beautiful natural scenery. One can see lines of small boats sailing across the Nile carrying the city visitors to the islands.

In Aswan there is an island called Kitchener Island or The Botanical Garden, it includes many kinds of plants & flowers from the Middle East & Far East.

Elephantine Island in Aswan represents the ancient boarder of Egypt. There is a museum with some monuments & tombs of some of the ancient Aswan princes. 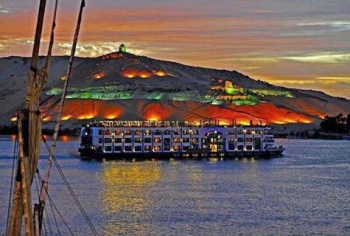 On the eastern bank of the Nile, south of Aswan are the ancient granite stone quarries. The stones used to build the Pharaonic  buildings & structures were cut from the quarries. 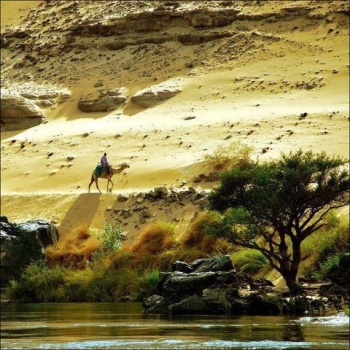 Kalabsha Temple is on the western bank of the Nile, it faces the new

High Dam, it is one of best examples of Egyptian art from the Roman time.

In 1962 German group dismantled the temple & moved it from its original site to its present site to save it from submersion in the Nile water.

Opposite to Elephantine Island on the western bank of the Nile are the tombs of the nobles, in a place called “Dome of the Air”.

In Aswan there is  Philae Temple is one of the most important monuments in Aswan. It was dedicated to the goddess Isis. Before building the High Dam, this temple was submerged under water most of the year.

By UNESCO the temple was dismantled & moved to its present site (Agilika Island) to be saved.

A sound & light show about the history of the area is presented daily at the temple in different languages.

Abu Simble Temple is about 280 km. from Aswan on the western side of the Nile, it faces the sunrise & it is the largest rock cut temple in all of Egypt. Ramses II built it between 1300 & 1233 BC.

UNESCO in 1965 moved the temple of Abu Simble to its present site to save it rom submersion. About 50 countries contributed to the moving operations. 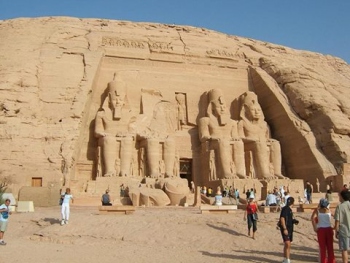 There are some other places for sightseeing in Aswan, e.g. Aga Khan Mausoleum, the Monastery of St. Simeon, the Unfinished Obelisk & the High Dam.

As a result of the importance of Aswan to the Egyptian tourism, there are many tourist hotels such as: Amon Tourist Village, Aswan Oberoi, Isis Island Hotel, Old Cataract, Basma, Kalabsha & Cleopatra Hotel.

Aswan is one of the Nubian cities in Egypt, and it was considered ancient in its southern gate, Aswan is located on the east bank of the Nile River at the first waterfall, and its population is approximately 1,480,284 people, according to statistics in 2016 AD, Aswan city is considered one of the oldest cities in Egypt, and it has many antiquities, And ancient civilizational landmarks, which made it a distinguished tourist city.

History of the city of Aswan

The importance of the city of Aswan appeared during the reign of the ancient nation, as it was the southern border point of Egypt at that time, and it enjoyed a decisive role in the history of Egypt in fighting the Hyksos, and many temples were erected in it, such as Philae temples that are considered the home of the god (Isis), and many other temples, which turned To churches in the time of Christianity in Egypt, during the fifth century AD, which facilitated the spread of the Christian religion in Nubia, whether in Egypt or Sudan, and at the advent of Islam, Aswan developed specifically in the tenth century AD, where it was a passage for caravans and travelers, to the coastal region of Eidab On the Red Sea, by Qeb To begin its cruise to the other bank of the Red Sea, where the countries of Hijaz, Yemen, and India are, as schools and centers of science and culture spread in it, and it is mentioned that the first military school was established in Egypt in 1837 AD in the city of Aswan, by Muhammad Ali.

The most important tourist attractions

Elephantine Island is located opposite the city of Aswan, and it served as an impregnable fort on the southern border, and its idol was the god (Khnum), so the temple of Khnum is the most famous landmark, in addition to the cemetery of the holy ram, the gate of King Amenhotep II, the trinity of State and cursed, and the scale of the Nile dating back to the Roman era, where the Nile flood measurements appear on it, in democratic and Arab Greek languages, and the island was known in the past as (Abu), meaning the age of the elephant, until its name in the Greek era turned to two thousand.

The tombs of the nobles

The tombs of the nobles are rock tombs of the rulers of the city of Aswan, whose origins date back to ancient times, and the most prominent of these tombs: the tomb of Mikho, the tomb of Sapni, and on each tomb was written the title of the ruler or noble buried in it, and the type of task he took, in addition to his role in protecting Egypt, and his trips Within the continent of Africa.

The Monastery of St. Simeon is one of the original Coptic monasteries in Egypt.

The length of the missing obelisk is approximately forty-one meters, while the length of its rib base is approximately four meters, while it weighs one hundred and seventeen tons, and it is a huge obelisk, the importance of which is reflected in the statement of the methods used by the ancient Egyptians in cutting old obelisks, in addition to the means used in I sculpted it.