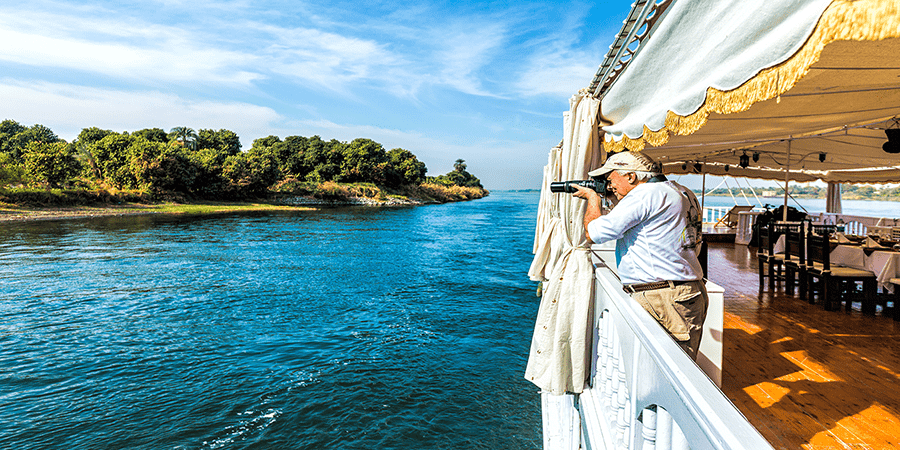 Nile Cruise in Egypt , now more than 300 Boats make sailing in REVIR NILE between LUXOR and Aswan in upper Egypt and sometime between CAIRO and Aswan , Nile Cruise for tourists love CLASSIC TOUR  in Egypt  love to see the pharaohs civilization

Although little is known about the earliest people of the Egyptian Nile, the well preserved rock carvings & pottery shards show the world oldest representations of rafts made of papyrus stalks & of small boats of wood.

Ancient woodworking tools have also been found; the adze , the awl, & the saw. All were made of copper. Images in tombs & temples show people building boats throughout dynastic times with the same kinds of tools.

In the early 1800s during the time of Mohamed Ali, the steamship became the backbone of the travel industry, replacing the more graceful, but slower DAHABIYA. These boats, immortalized in Agatha Christies “Death on the Nile”, remained the premier tourist boat well into the 20th century, they are the modern boats on the RIVER NILE.

Nile Cruise of Sherton internationals two sisters ship; ISIS & OSIRIS were the 1st modern cruise ships in the Nile. They were imported from Germany in 1959.

A 1st time visitor to Egypt who wants a CLASSICAL TOUR (visiting antiquities) would do well to book a Nile cruise. Modern airlines, of course, shuttle tourists to the south of Egypt, but from historical view point the Nile Cruise was the only way to visit the tombs & temples located along this stretch of the river. It is still a popular way of visiting Upper Egypt & has many advantages to other means of traveling.

Firstly it is very good to unpack once & have your hotel travel with you, rather than the hectic routine of air & land tours.

Also besides the more relaxed mode of Travel IN EGYPT, there are other significant advantages. River Nile cruise often visit a wider variety of antiquities along the banks of the River. They also allow the tourist to gain a prospective of rural EGYPT, where people live the same way they did even thousands of years ago, in mud brick houses, tending their fields with wooden plows & moving produce via donkeys. It is a wonderful experience to sit on the sun deck of a Nile cruise , shipping a drink while watching 5,000 years of civilization slowly come back.

A short flight to ABU SIMBLE in the southern part of Egypt completed by a seven day Nile cruise it will be more comfortable, but now the tourist can do it in all kind of program after diversity of AIRLINES operating in EGYPT.

The Nile cruise is a floating hotel; 4 stars or 5 stars standard or 5 stars Deluxe or 5 stars Ultra Deluxe. The good boats have most of the accommodations of a land hotel, including small swimming pool, hot tubs, exercise rooms, restaurants, stores, & small library. Some Nile cruise even has suites available.

Like land hotels, in Nile cruise meals on board most Nile cruises are buffet style & include hot & cold food. Most boats have good modern water filtration. Most Nile cruise boats operate all year.

Pricing, as with land hotels, will also have a large range based on both the boat & the accommodations. They range in price between $50 USD to almost $300 USD per person per night in a double room with seasonal increases during Christmas & Easter.